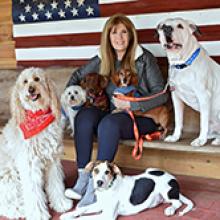 Jill Rappaport is an award-winning animal advocate, network journalist and best-selling author. Most recently, she hosted and was a consulting producer for Animal Planet’s inaugural Dog Bowl, an idea she created and championed to highlight older animals in need.

Considered a voice for the voiceless, Jill works tirelessly to make a difference for animals in need by shining a light on animal shelters across America.

Throughout her news, acting and producing career, she has developed, produced and hosted several award-winning and beloved television segments that feature adoptable animals, including:

She is proud that EACH show achieved a 100% adoption record! In addition, her heartfelt animal welfare stories for NBC'S Nightly News always resonate with audiences, many of which have gone viral. She has also hosted all the rescue segments for Animal Planet’s Puppy Bowl.

In addition, Jill has written four books, three focusing on animal welfare including the best-selling People We Know, Horses They Love, featuring Robert Redford on the cover. She also has a complete line of dog and cat toys, dog treats, leashes, collars and dog beds all benefiting shelter animals in need (Jill Rappaport’s Rescued Me). The toys and treats are sold exclusively on QVC.

Jill’s work has garnered her a number of coveted honors including a record six Genesis Awards from the Humane Society of the United States (HSUS), the first "Voice for the Animals" Award from HSUS, The Presidential Service Award for Media Excellence from the ASPCA, and the Excellence in Journalism and Outstanding Contributions to the Pet Industry Award presented by the American Pet Products Association. She has also had the honor of ringing The NYSE Opening and Closing bell, all to raise awareness for pets in need.

Jill resides on her farm in Long Island, New York, with her six horses and six rescue dogs whom she refers to as her “fur angels.” She says, “Animal welfare is my oxygen, and when you do what you love, you never work a day in your life.”